The ecosystem, is it the cycle of life? Dyana, 9
If you add mentos in the coke, it explodesJoseph, 11
- May the temperature be below 0°C?
- Ah no, impossible The class, all together

It is in the North of Le Caillou, in the independence fief Kanak in Hienghène, that we found a second school to organize our workshops.

Let's set the scene. Hienghene is a small municipality of 2500 inhabitants, part of the Hoot ma Waap customary area, whose few buildings are spread along a magnificent bay, itself protected by the coral reef of Eastern Caledonia. To the east, therefore, is the lagoon, with a few islets and two marine protected areas, in the middle of which stand the Hen and the Hienghene Sphinx, two limestone geological formations with familiar shapes. To the south, a lagoon in the lagoon, surrounded by steep cliffs, the Linderaliques, dug out of caves and stalactites, serve as shelter for many birds. To the west, a few dirt roads give access to a multitude of tribes, perched in the Mountain. Finally, to the north is Mount Panié, a protected conservation area and the highest peak in New Caledonia. In short, a magnificent place between land and sea, which has a rich but threatened biodiversity, for which two local associations Dayu Biik and Kaa Porau are fighting.

It is in the middle of this idyllic setting that the small public school of Hienghène is located, where the children of the neighbouring tribes gather. Here, children are made aware of their environment from an early age. The proliferation of invasive species such as deer or wild pigs, causing soil erosion, is a well known subject. They know that these animals are endangering the endemic tree of neighbouring Mount Panié, the Kaori. They also know how to recognize the Ouvéa parakeet, the Crested Cagou, understand the dangers to marine life of plastic bags left at sea and recite poems about the danger of forest fires.

We are greeted by the children with shy little greetings, then big smiles and even hugs on the second day. Very quickly, we realize that these two days will be pleasant. Children have unlimited curiosity, raise their hands to participate, respect each other, and are receptive to our workshops. In addition, the teacher, Master Gaël, will help us throughout these two days to include our interventions in the learning done in class beforehand.

Culture, beliefs, tradition, are recurring terms when children ask themselves questions about another country, or about children from elsewhere. They operate in a society governed by codes and protocols to be respected. Thus, one student stops in the middle of her letter, because she had forgotten to say the "Hello", another will explain to us the meaning of shooting stars as the manifestation of evil spirits.

At the end of the second day, we organize a snack and give the students their bracelets. "Are we dragonflies now too? "a student slips in. The sun is still high in the sky, illuminating in bright glare the Hienghene Chicken a few hundred meters away, and in a few hours, it will go to bed behind Mount Panié, and then the holidays in Hienghène can begin.

Finally, in the evening, we are invited to share a barbecue with the school's teachers around a large fire. We cook a few pieces of marinated meat, and talk for a few hours under a starry sky of travel, environment, school and life, oh how sweet it is here in Hienghène. 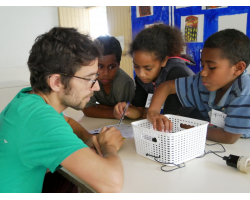 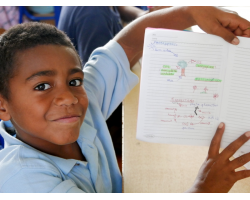 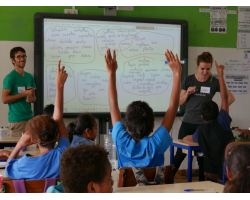 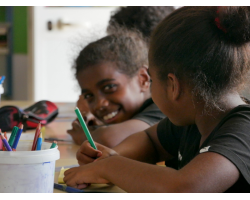 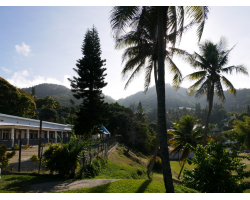 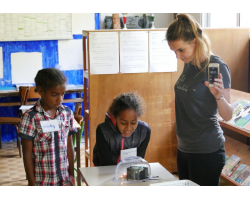 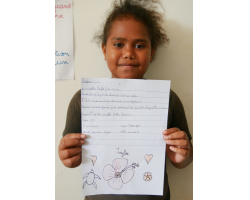 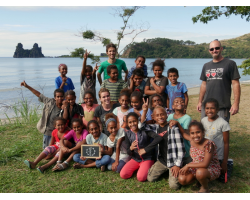