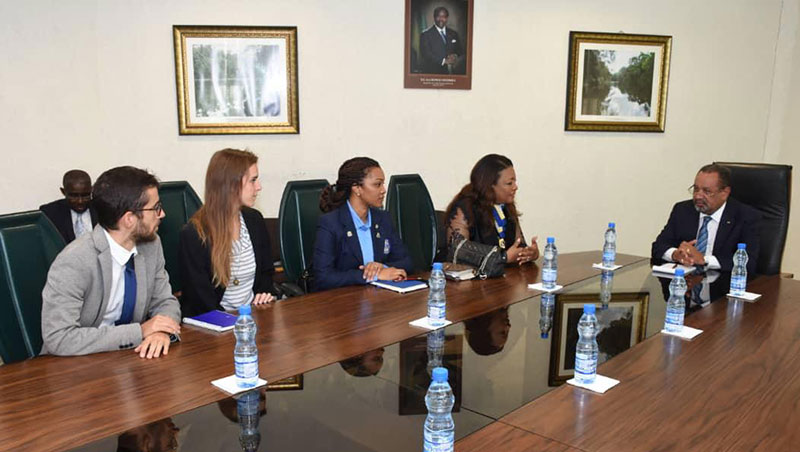 On April 10, 2019, we were welcomed by the Minister of State, Guy Bertrand Mapangou, for a brief discussion on the Gabonese government's policy with regard to environmental protection. Here is, in essence, the content of this interview.

- How is environmental protection organised in Gabon today?

[Minister] Gabon is unpretentious, a leader on climate issues and environmental protection. There are many initiatives being implemented, from climate plans to biodiversity protection. Today, 11% of the territory corresponds to protected areas, with 11 national terrestrial parks, one of which is a UNESCO World Heritage Site. In addition, there are two marine parks.

Gabon should be able to benefit from international aid for environmental protection, rather than having it reach NGOs. It is not normal for a small country like Gabon to be asked to make every effort when the major powers do nothing, and pollute much more. The international community lives off the oxygen produced by Gabon's forests.

- How to integrate local populations into environmental considerations and encourage them to become involved in protecting the environment?

[Minister] What is the impact on the population of environmental protection plans? On employment, for example? There is no point in making plans to protect the environment if man is left out. Are Pygmy populations consulted? They should be put forward more to learn from them about how to live with their environment. There is a real knowledge to be found. They don't have nets, and yet they fish, they don't have guns, but they hunt. They don't hunt for hunting, they take samples. They don't have a pharmacy, but they treat themselves with plants. Pygmies, on the other hand, do not know about malaria because they know how to keep mosquitoes away and heal from them. An ethno-anthropo-ecological approach is needed. In Port Gentil, 20 years ago, people were still digging holes to escape their waste behind houses. Pygmies continue to manage manure behind their homes to produce their own fertilizer.

The village populations question us, for example, about the difficulty of living together with the elephants that destroy the crops. Ignoring these complaints would be a mistake, because we will not be able to make environmental protection a sustainable activity if we do not have the support of the people. We have to look at how other countries, Namibia or Kenya, have solved this problem.

- What opportunities for ecotourism in Gabon? What infrastructure will be needed and which audience to target ?

[Minister] The State has a role to play in setting up an incentive and communication policy to promote the country's potential for ecotourism. Kenya, Mauritius and Botswana have economies that are predominantly tourism-oriented, and Gabon should be able to benefit from them. We have exceptional biodiversity and landscapes to highlight.

But the Gabonese state does not have the money for it, and the investments must come from the private sector. The state had tried to build lodges in some national parks, but there were maintenance problems, and funds were lacking. One of the main difficulties for access to the parks is the roads and infrastructure to get there. It is necessary to be able to develop these infrastructures, in order to ensure a tourist flow from Libreville to the national parks.

Most Gabonese have never been to national parks, have never seen elephants. There is a profound lack of knowledge of the forest, especially in large cities. There is therefore a need for local tourism to be developed.

The government believes in luxury tourism, but not too much in mass tourism, so that it can fund park protection and anti-poaching programs without compromising efforts with a massive influx of tourists. There would be an environmental and safety risk if there were noisy crowds in the forest. However, the subject of eco-tourism is dealt with by the Ministry of Tourism, not by the Ministry of Water and Forests.

There is a project, in coordination with UNESCO and the national public institute, to include the subject of the environment in the school curriculum, including the training of trainers and teachers on these subjects.

Environmental awareness has existed for a long time and in many countries but is not working. Rather, there is a need for "consent", methods and didactic tools to measure a behavioural outcome.

In the 2000s, when the national parks were created, there was an Environmental Education (ERE) program that has since disappeared. Similarly, 30 years ago in primary school, there were manual labour courses, where people learned to cultivate the soil, to build a shelter,... it was the first step towards environmental education.

When we met the Minister of State, Guy Bertrand Mapangou, he had only been in office for a few months following a ministerial reshuffle.

It is not true to think that the Gabonese forest produces the oxygen we breathe. It is indeed a mature forest, i.e. one that no longer grows. The production of oxygen resulting from the growth of living trees is compensated by the production of CO2 resulting from the decomposition of dead wood by the biotope, particularly present in humus. A mature forest is therefore carbon dioxide neutral.

Gabonese pygmies live hidden in the forest and have a nomadic lifestyle. This is the indigenous population of Gabon, the other ethnic groups having arrived during migrations from the 11th century onwards. It is very difficult to approach pygmies villages, which can take several weeks to walk through the forest. Many conflicts with other ethnic groups have occurred in the past, and they have some autonomy on their territory, with agreements between the government and the pygmies. For example, it is forbidden to talk about ethno-botany.

Today, most national parks are not (or very difficult) to visit. There are many reasons for this, ranging from government bans in presidential parks, to bans related to armed conflicts to combat poaching or simply the total lack of infrastructure.