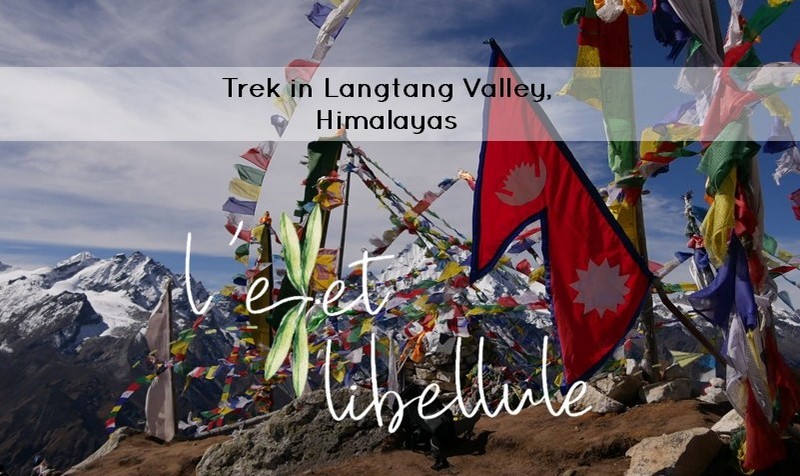 This morning, we hear some tourist helicopters circling the valley. Then, the thud of waterfalls and crows take over as you pass through the ancient village of Langtang. Here, a gray carpet of rocks and pebbles has covered the most inhabited village in the valley. It was during the last earthquake, in 2015, that an avalanche of snow and stone led to the death of a hundred Nepalese and dozens of foreign trekkers. This is what tells us the memorial surmounted is half-sphere of stone and a golden peak, it is the traditional form of Buddhist monuments in Nepal: the Stupa.

We feel sad when we cross this immense scree and during this trek, we will not stop thinking about the inhabitants of the valley who have lost their wives, friends or children. From Langtang, long stone walls separate the path in two ways, it is customary to turn left, as when you encounter a stupa. Prayer wheels are also installed on the rivers. They rotate thanks to the small immersed wooden propeller.

A few tens of meters from the destroyed village, a new Langtang was built, thanks to the international help that supported the reconstruction of the valley. We stop for the tea break. From here, we begin to see grazing yaks and the houses are surrounded by stone walls, to make pens. The village denotes with its large telephone antenna. Here the lodges have 2 or 3 floors, the bases are cement. One has the feeling that paradoxically the more one sinks in the valley, the more the lodges are comfortable.

Despite the tingling in the hands and the headache, we acclimate rather well to the altitude which is increasing little by little. Tonight, we sleep at 3800m! The village of Kyanjin Gompa is the largest we have seen in the valley so far. The guesthouses are numerous, a monastery is installed overlooking the village, there is a bakery and a yak cheese factory (or nak rather, the yak is the male!). 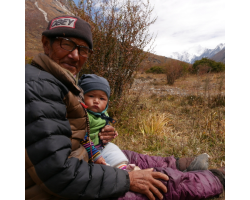 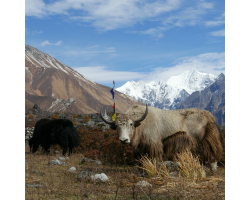 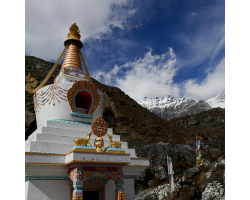 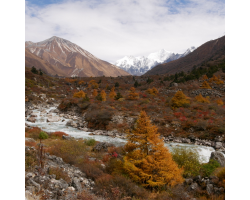 Lifted at 5 o'clock for breakfast at the corner of the wood stove and off to Tserko Ri's climb! Gradually, the highest peaks are illuminated, then the sun goes over the ridges. The morning show is breathtaking.

It will take more than 4 hours to reach the top of the Tserko Ri, it's not a record but it was impossible for us to go faster! To avoid the effects of lack of oxygen, we go so sweet and after a while, we have more choice than to move very slowly! The last meters are almost flat. Ideal to catch your breath before reaching the summit and the many prayer flags fluttering in the wind that we have been taunting for a while now!

And it's magical, we're surrounded by the Lirung, the Yala and other snow-capped peaks, some of which are over 7000 m high! The colors of the flags contrast with the brown and the white of the mountain and the orange of the valley and blue of the sky. Surprised by the mild temperature at 4984m above sea level, we take the time to enjoy this 360-degree landscape. You can see the village from where we left at dawn, very small down, recognizable with its blue tin roofs. And when we turn our backs, the mountains that face us mark the border with Tibet.

A high moment, aloft and emotions! 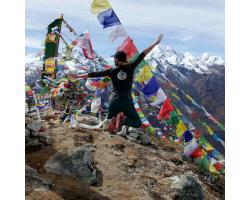 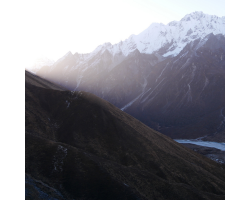 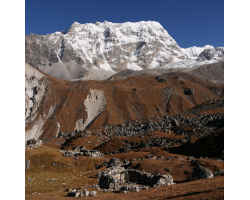 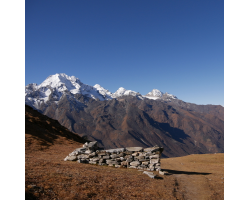